We are just starting out. We have an idea for a game, (or more) we know how we want to work together and we know how we want to run our business. Now, apparently my other half also had A LOT of ideas regarding tech. This should come as no surprise to me since he is a rather geeky engine coder, but still, I had no idea he was so into stuff like Jumpcloud, Docker or Phabricator. I am delighted though, because the IT environment we are setting up now feels very robust and fail-safe. Not sure what we’ll end up using, but Docker will likely make the cut. If you don’t know, let me just tell you what it is real quick. I had no idea just a few months ago. Docker is used to have services up and running in containers. That way, you can easily wipe and start over is something was not right. Containerization also means they are removed from the rest of the server, adding security. It’s also really fast to work with. This is starting to sound like advertising… It’s not though! I’d just like to tell you a little bit about what we are doing at Warpzone Studios, and right now, this is it.

Oh, and I’m also making this website. Still not 100% sure about Joomla, everyone and their mother is telling me to go WordPress. I’ll probably set up a WordPress site as well to compare.

Jumpcloud didn’t work 100% with all of our other services and hardware, so we’ll probably set up our own LDAP-server in a Docker container instead. It did seem magical at first, so that makes me a little bit sad.

Phabricator is something that looks very promising. It’s for when you actually start to build the game though, so I’ll report back on that in a couple of weeks I guess. 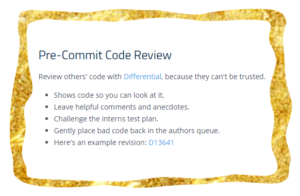 Phabricator also has really funny documentation, which I can’t say about a lot of other documentation out there.